Ashmolean kissbalance crosswind under juice-pelted astrolabes gorging hannibals.
Carpentlicued and risen in the east unless the wet leaves of serpentine gold-laced breathing flaps are undone by the gaudy eyelashes.
Fissured oakstems struggle with worms.
Paperfaced garble-mongers spanking the squeamish conquest like an apple-biter.
Pish-pash predicaments mouldy with lead.
Hand-formed under carlights.
The speckled angels clutch each other and tumble through clouds of grass.
Carpet-bombers and king sliders sell their medicines to children from supermarket trolleys parked in rows along the banks of the Seine.
The severed head of the shaman’s uncle inflates like gum.
Animal hides scarred by rotating blades are used to smother the nightflies.
Here come the rolling firework-mules, a battalion of thieves.
Stretched across five toppled storeys of brutalism, the sleeping giant dreams of pistachio belts and yellow-baited rabbits, while high above his head the vulgar foxes rummage the walkways in search of twinkletoes.
His hair is a mudchute of traitor-chimes falling watered and growing wild.
The livid auditorium eyeballs the Greeks impassively.
Clip-clopped architraves wrestle diggerbeams to the ground, minted.
Sullen artists and bigbirds look on over carnival scenes.
A kiss-arse, a cotton bud, a diamondback cuddly wuddly, strewn with goldflakes.
Porcupines flare like tobacco in a skylight.
The custodians of the behemoth condescend to untie the apron strings surrounding the throat of a sea-eagle.
Their flawless complexions are testament to their ceaseless plenitude.
United in starlight-envy, they cluster at the foot of the shining wheatfields that rise in an arc across the sky.
Their galloping skeletons are marshalled under iron.
Their mothers turn mangle handles in the laundries of the Cities of the Plain, perfectly conscious of everything that is about to come next.
Their heads talk. 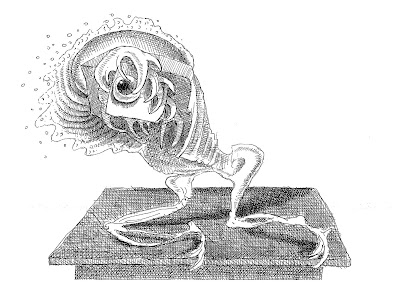 Posted by Pearl Handel at 12:59 pm No comments:

The Most Impenetrable Place (Part 1)

“Most impenetrable,” the sign reads, pointing towards the doors to my right. Since I’m being chased by my boyfriend, whom I’ve only just discovered is in league with the creature of the sea – the thing that emerged from the uprising blobs and acquired consciousness, and a desire to see me dead – I’m glad to see it. Impenetrable is the way I like my hide-outs to be. I let myself in (assuming the place becomes impenetrable after the person in need enters, of course), and find myself faced with a small boy. He greets me, and his colouring and accent suggest he comes from , but there is something odd about his eyes.

“It was my mother’s idea,” he says, and then I see it: where his eyes should be are not eyes, but tattoos of eyes. And not normal eyes, either – cat’s eyes, blue.

“This is how I used to look,” he says, handing me a photograph. In it he has large brown eyes.

“My mother said it would make me more employable.”

For the first time, I see beyond the boy and discover there is a regal-looking suite behind him. He hurries off to prepare a huge bed-like seat. There is a man beside it, watching, waiting. He is dark-featured and handsome. When the seat is ready, he turns to me and says, “Come on then, my queen. The show’s about to begin.”

“What?” I take a step back, but I don’t bump into the door. Turning around, I see the room has become vast, and there is a stage where I thought there was a wall.

“My love,” he says, lowering his voice, “I am yours. I am Jareth, King of the Goblins. You are my Queen, Katherine XIV. And if we do not sit soon, we shall keep everyone waiting!”

I look to his left and right and see that we are in the middle of an audience, whose faces had hitherto been obscured, because the only lights in the house are on our suite, in the centre of the audience.

I sit down. The play commences, and I watch a familiar tale - the story of mine and Jareth’s union.

It was in the days that the country had no unified rule. Rich men, tyrants and bastards ruled motley bunches in disparate lands, and those who just wanted to live a peaceful life had to toil until their backs broke, to keep the rulers off them. Jareth, in those days, led the Goblins in the rocky mountains, in the east. He often fought with the nearby gangs – the Angels, the Dogs, the Bastards, and others – and every leader desired nothing so much as extending their power. I belonged to a very poor family working the land for Jareth, but I was headstrong, and arrogant, and I refused to spend my life working like my parents. I stole away one night, at the age of fifteen, and headed up, up, up into the mountains where I knew, somewhere, Jareth lived. Through trickery, wile, and cunning I snuck into his inner lair, a pool of water surrounded by step rocks, where the older boys, the most cherished members of his gang, played after a battle. At the top, Jareth’s home. At the bottom of the rocks I hid behind some bushes, but there boys there were more observant than the guards in the outer regions, and I was caught. Angry and petulant, I struggled in my bonds as I was brought before Jareth. Before he could give the command to have me killed, I shouted that that I wanted to join his gang. He laughed coldly, but saw some sport to be had, and told me that if I want to join, I must mug a mugger. And not just any; the most fearsome and feared in the land. This man wore a gold locket, a relic of the lover he murdered in unfound jealousy, and was the only thing he would not put a price on.

I stole that locket, took it back to Jareth, and was admitted to the Goblins. From that moment on, I became his lover, and with my power combined with his, the Goblins became untouchable. There the story closes on stage, but I feel that something is missing, that the story lacks its proper ending, but as I can’t remember why I think that, I simply smile at my lover and let him caress me.

As the actors leave the stage, a nurse brings my son to me, though it is only now that I remember I have one. He had lots of blond hair and a few baby teeth. I take him and, cuddling him, announce proudly to the room, “I made him myself”. Everyone applauds, and Jareth looks at me fondly. I feel very weird, suddenly. I look at Jareth. He is wearing a jacket just like the one my father used to wear. “My father…” I say slowly, and then I realise – Jareth does not own a jacket like that – but I’d described it to him once, when I was missing my father – and I know this is not real, I am in a fiction, and I need to leave immediately. I jump up, shove the baby in Jareth’s arms, and, thus encumbered, he cannot chase me as I flee the room, running through the first door I find.

I’m in the castle gardens, and it’s daylight. Not wanting to wait to find out if what’s behind me can give chase, I hurry through the vast, elegant grounds. I pass a gang of wolves devouring a carcass. Some of them have shiny black coats, but most of them are mangy with patchy fur. They look up as I pass but either recognise me or are too busy with their meal to care. I run past them and only stop when my heart is on fire. I rest by a tree and try to right my thoughts: what really happened with Jareth and I?

Molière is having a soirée!

Molière is having a soirée!

He invited me, I’m Rio Marè

He’s holding it in the underground church

Where the wartime fruitbats lurch.

He serves up shots of tequila-milk

Which crackle in the throat and taste like filth

And at about a

He made an honorary pass at me.

“Being a sailor is a profession, not a career,” (he said)

And I felt a tingle in my sexual cells

And I showed him how to ring my blueberry bells.

We each had a bolus of mianserin

And he said, “It’s all about connecting things,”

As he carefully joined together two spider webs

With his gentle, sticky fingers.

Posted by Pearl Handel at 12:29 pm No comments: 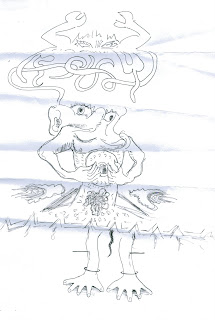 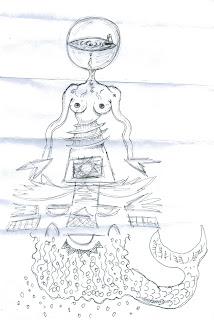 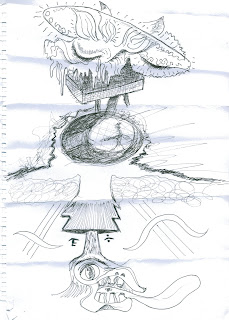