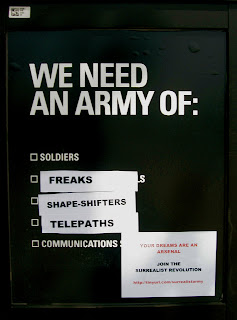 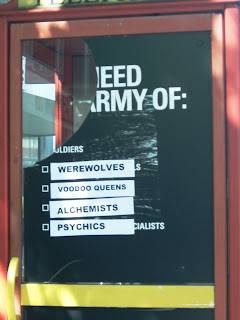 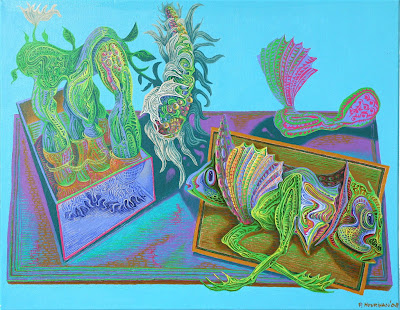 by Patrick Hourihan
Posted by Pearl Handel at 7:28 pm 1 comment: 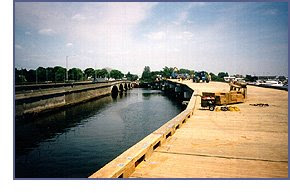 Inspired by the ‘exteriority’ concept from the Madrid Surrealist Group, from their response to Mattias’ letters, and from the phrase 'Surrealists as Urbanists', I felt compelled to write this:

Let me tell you of a case that is happening right now where I live, and that started long  long ago. A couple of thousand people included me live in the last town of a row of three. My town, that I call the Village of the Eastern Bay ends very beautifully with the shores of the ocean. The other two towns that go inland are the Arty Town, the one next to mine, and the other that I call The Sleepy Town. They go inland until reaching the city of Providence through a highway.

The three towns link one another through the bridges built in between them. So, we have a bridge  that links my town to Arty Town, and a second bridge that links Arty Town to Sleepy Town. Two bridges. But not really.  When I leave the Village of the Eastern Bay every morning with the bus to go to the city, I cross a bridge pointed as in use and temporary according to urban legends, because a second one right next to it is under construction, naked yet with wooden ribs.  The urban legends move from mouth to mouth and reach my ears often and they tell that that bridge, that second one, appeared taking form ‘ since I first started smoking. I was 17 and now I am 35’- said a woman long ago in a bus ride. The papers and the internet also talk about it. There is a blurred suspicion about the whole construction project. The peoples all look at the sky and wonder when the bridge will be finished. I can see that is true: riding on wheels over the bridge in use, the busy one, I look at the unfinished one to my left when I leave the town, to my right when I return, and I see everlasting stillness. I see stop- ness. I see ‘nothing happens’. I see trails of working and construction intentions, like yellow signs ‘ under construction’, and very rarely, really, two or more men eating doughnuts standing still, some sitting on bricks. But mostly, that mysterious bridge that resists growing to touch the other side is left alone, solitaire.

But the story goes on with the ride towards the second town and towards the other bridge that allows the kissing between the Arty Town and the Sleepy Town. Here the case of resisting bridges triplicates.  One rides over the middle bridge, again, the one in use, the busy one, and if one is heading towards the city, can see the sophistication of the claim of resistance of movement, construction, creation…. when turning the eyes to the right. There is one bridge, the villagers call it the original bridge. It is considerable smaller, as the water in between the land runs in narrower space. It is made of dark wood. It is pretty and no one can ride a car or anything besides bicycles and rolling skates. It is the bridge for the feet. And for the fishermen. Then, turning the eyes to the left, one can see that sort of path of cement that sustain itself with grey, solid short columns above the water, and one more time, that thing from memorable times. So, we have the old bridge, the one in use in the middle and the one that will be for the future.                         Days after days, mornings and evenings for half a year I have looked and now I wonder what that all mean.  I am certain that I have come to hear what the bridges under construction say out loud and their thoughts have pushed me hard to put it on writing. They say they are not needed. They say they are the picture that titles ‘creating needs’. They say that the towns want to have their space, and indeed, they shout the towns want more and more water in between them…only if they could be lost inside the ocean! The bridges say they don’t want to be finished, that there is nothing to be built or to complete as they are already what they are. They are, they say, the question. And this is the end.

Posted by Pearl Handel at 4:42 pm No comments: