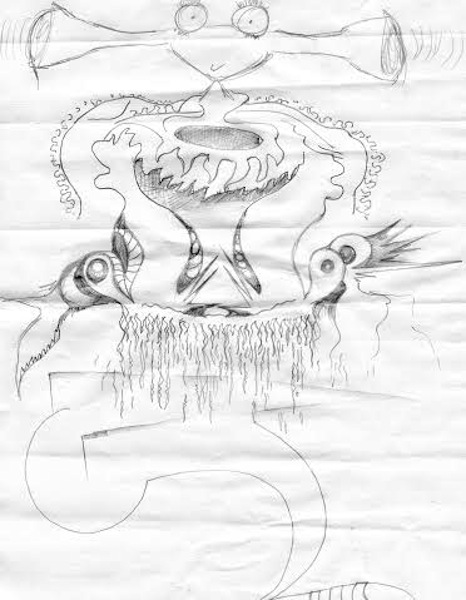 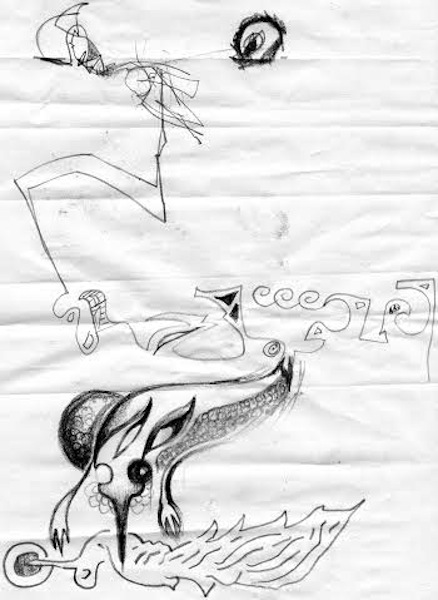 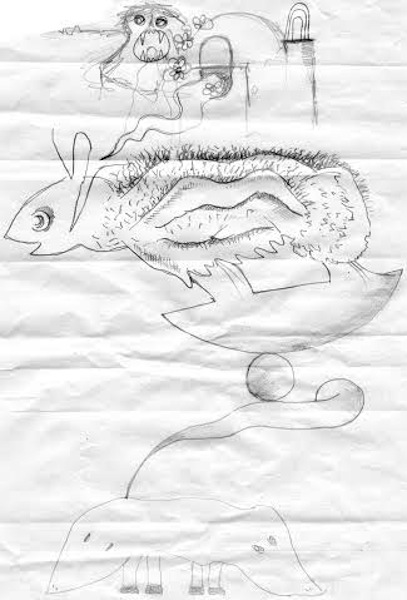 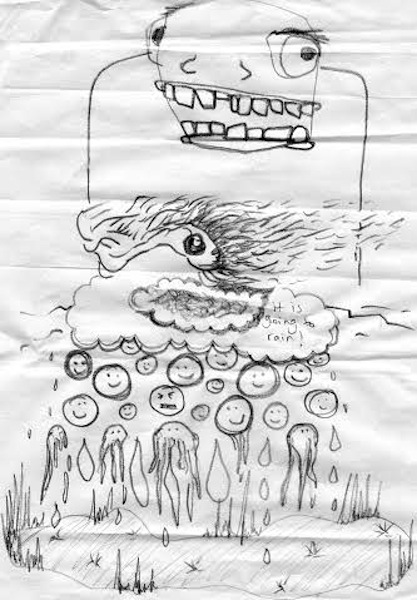 Posted by Pearl Handel at 3:19 pm No comments:

Elva had been fiddling with some pieces of card and produced what appeared to be symbols. So we each interpreted them. Then we took turns throwing them on the table and reading from them. The results are as follows…

1=a roof, without a house. Because they are not for houses but for sitting on; to view from almost a birds eye view.
2= Sizing each other up. Or the skin before it is assaulted.
3= A bird sunbathing with sprawled out wings.
4= sleep.
5= cats touching noses. The moment they change their minds and realize they don’t like each other. Or when a cat just abruptly attacks you after being friendly (there is a behavioral term for this, I cant remember)
6= Neighbors spying on each other, or waving from their lawns, “Hey Hank, how are the kids?”/ or the same as saying “Hi! How are you?”
7= The little one runs away from the big ones, but they pull at its arms. AKA; wanting to be released.
8= Up? Down? Who gives a shit?
9= To spit on someone eloquently, with style. (This being the gesture you make with your tongue)
-Kirsty Woods


Great pyramid rolls across the ocean to find a secret scroll within a small city that faced tall mountains and a pathway with many stairs leading to a giant monumental torch made of stone.
-Patrick Hourihan

A dry tent is good.
Though it curls
Double you.
A coil of rope battery
On my camping bed.
Next to the two main pyramids.
They opened up the ship.
And down from the ramp
Came the cones.
-Paul Day

The ecclesiast is behind the moose. The moose is beside the judge, who cant stop sneezing. Spiraling out to the west, the hills chase tensed arms. The finger points at the moose in defiance of the swiftly approaching eyebrows. Stop! Don't go south. You’ll meet your death.
(EJ)


Beyond the fence a majority will exert pressure on individuals.

rest up and bid your time,


The ship with white sails glides into the purple room. Because the bird gliding overhead is landing near a string web. A rolling coffin opens and the voice of death calls out like a wax cylinder screaming across the distant ocean.
(PH)


Self-sacrifice
body as shield
rush to cover the eyes and ears but they accidently suffocate. Hysterical aftermath. being looked at by two rotating eyes, entering the shielded ones soul, like light through the inevitable gaps between fingers.
because the eyes rotate like a drill and churn holes; that is how fingers are made. By the creepy man in the bushes looking at animals in the zoo.
That is what it is to be a tiger behind glass.
(KW)