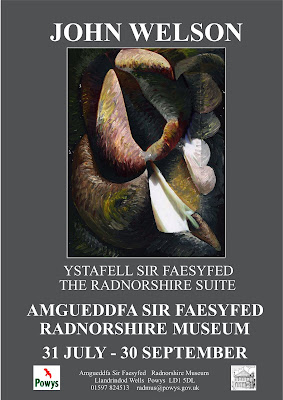 THE RETURN OF COFFIN JOE: a review of Embodiment of Evil (2008)

Coffin Joe, undefeated as ever by the forces of either death or narrative logic, is back on the big screen, in the final part of what turns out to have been a trilogy. Shamelessly falsifying the ending of the previous instalment (and unrivalled masterpiece) This Night I'll Possess Your Corpse (1967), Coffin Joe emerges from the bowels of darkness to continue his frenzied search for a perfect woman, a son, and the continuity of his own blood. Relocated this time to the favelas of São Paolo, his delirium rages against everything in its path – his lovers, his followers, his tormentors, his own soul, and above all the cops and priests who rule the filthy world against which he hurls his unstoppable fury. The mayhem alternates between new scenes of inspired brutality – particularly, as always, against women – and horribly beautiful hauntings by both his previous victims and the afterlife whose existence he so vehemently denies. Snakes, spiders, cockroaches, rats, cannibalism, necrophilia and an Aladdin's cave of torture provide sumptuous confirmation that Coffin Joe can still work the old voodoo. Embodiment of Evil, it has to be said, feels at times a little like a greatest hits compilation; but it's hard to be churlish about it when the hits are so dazzlingly great.

The first part of the Coffin Joe trilogy, At Midnight I'll Take Your Soul (1963), has been hailed as Brazil's first horror film, and according to the film-maker himself came from the real world of his nightmares. But perhaps inevitably, in contrast with the pure fever vision of the earlier films, Embodiment of Evil bears some minor scars from the 40 intervening years of popular culture. Before, when the audience laughed, it was with exhilaration, amazement, and sheer Sadean delight – not just at the feats Coffin Joe could get away with, or at the ways in which he was punished for those he could not, but also at our own voluptuous complicity in his crimes. Now, in this new film, the exhilaration and complicity remain, but there are also a few unexpectedly knowing and easy laughs; scenes which, instead of poetically delirious images (glowing fingernails emerging from cell door), serve us with mere signifiers (a depraved priest's tattoos and nipple clamps); moments when we suddenly feel that we are not, in fact, experiencing a demented vision of blood, but merely watching a horror film. Such moments are still relatively few and far between – José Mojica Marins has not degenerated into Wes Craven – but they ultimately prevent Embodiment of Evil from ever quite reaching the same heights, or depths, as its predecessors.

But despite the lapses, the compromises, the occasional pauses for a breather on his own laurels, Coffin Joe's Gothic imagination still blazes with the same black light – spurting with lust, incoherent with rage, thrilling, beautiful. As he tells his assembled lovers in the film's final scene, he knows as well as any of us that true creation lies at the "pole of tension" between good and evil. His own pole of tension bears up pretty well too. By the end of the film his superiority might not have proven quite as immortal as he had hoped, but it's made for a very fuckable corpse.

With eternal thanks to Sparty Mills for giving me my first introduction to the world of Coffin Joe
Posted by Pearl Handel at 10:09 pm No comments: 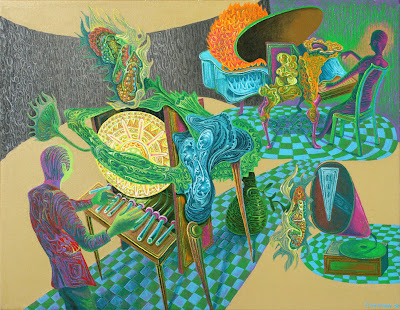 Fantastic Duet
(acrylic on canvas)
Posted by Pearl Handel at 1:55 pm No comments:

A Manifesto for Surrealist London

'The matter of our work is everywhere present', wrote the old alchemists, and that is the truth. All the wonders lie within a stone's throw of King's Cross Station.
~ Arthur Machen, Things Near and Far.

Cthulu waits beneath the streets

Posted by Pearl Handel at 1:51 pm No comments: