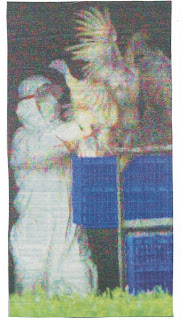 Posted by Pearl Handel at 3:13 pm No comments: 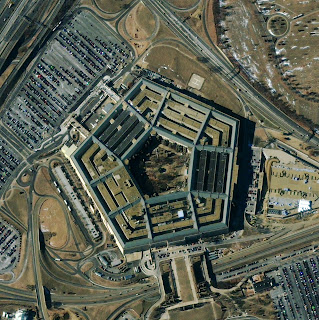 FROM THE STRANGLER TO THE HANGMAN

When the House of Commons voted on 11th June in favour of 42 days’ detention without charge for “terror” suspects, press and politicians alike suddenly started acting as if this were the last straw. The biggest attention-grabber was the rightwing Tory MP David Davis, who resigned his seat in order to “argue against the slow strangulation of fundamental British freedoms by this government”. Davis himself, of course, prefers the quick strangulation of hanging – his enthusiasm for a return to capital punishment is a matter of public record, as is his longstanding hostility to the fundamental freedoms of lesbians, gay men, transsexuals, and women seeking abortions. But this man of honour has quietly dropped these issues from his public image and now, loudly applauded on all sides for his “guts” and “principles”, is presenting himself to the electorate as “David Davis for Freedom”, a doughty Superman with a faraway look in his eyes and a raging hard-on for the Magna Carta. This Bob Geldof of British Freedoms has evidently decided to Make Tyranny History, and may even be planning to use the same tactics which successfully ended world poverty in 2005. One of London’s freesheets last week published rumours of a Davis-sponsored “carnival of freedom”, with the musician Nigel Kennedy, in a move in no way intended as publicity for his new album, announcing his support. The dispiriting and plug-ugly sight of the two of them grinning at each other across filthy tube carriage floors last Monday night will keep umor fans laughing for weeks to come.

The 42 days vote was not the last straw. Nor were the CCTV, DNA database or ID cards which Gordon Brown was at such pains to justify a few days ago in his speech to the Institute for Public Policy Research. Nor were 28-day detentions, the restrictions on free speech under the Terrorism Act, or the criminalisation of political protest under SOCPA; nor was the introduction of ASBOs to police every kind of “undesirable” from children to sex workers, or the increased use of immigration law, detention and deportation on almost any pretext from “terrorism” to “trafficking” to no pretext at all… Need we go on? You can pile on as many more straws as you like; the camel has been dead so long that it’s rotted clean away – no, not even a little camel toe left to tell the tale. And where exactly was Superdave when these and countless other such measures were introduced? Why, sitting right in the House of Commons, of course, and heartily doing what the Commons is there for – debating the best way to protect the interests of the ruling class.

So why has Davis taken his ostentatious stand over this particular issue? His resignation from the Commons will not have the slightest impact on the measure’s progress through Parliament. But opposing 42 days is only a pretext, a shrewd move in a wider game. By appropriating the 42-day detention issue as “his” cause, Davis is seeking to hijack public opposition to this deeply unpopular measure and use it for his own ends: feeding a groundswell of right-wing populism, and presenting it in a “civil libertarian” guise so that liberals, ex-Labour voters and other concerned and well-meaning folk will get in line behind him. The scary part is that it’s working, and not just with habitual opportunists like Tony Benn: growing numbers of people are falling for the sleight-of-hand by which opposition to 42-day detention has become synonymous with support for David Davis.

Re-electing Davis to his safe Tory seat unopposed is not going to make the difference between repression and freedom. This is just a squabble between jailers over how big a key to use, a media circus for the entertainment of cretins and the benefit of opportunists. Carnival of freedom? We laughed till we choked.
Posted by Pearl Handel at 4:11 pm No comments: 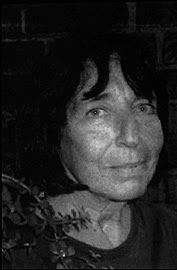 We are all shocked to hear the news that Celia Gourinski has died. As a member of the Surrealist Group of Río de la Plata, Celia has been SLAG's friend, comrade and playmate. We know that will miss her, and we send heartfelt and loving condolences to our friends in Buenos Aires and Montevideo, who will miss her most of all.
Posted by Pearl Handel at 3:16 pm No comments: 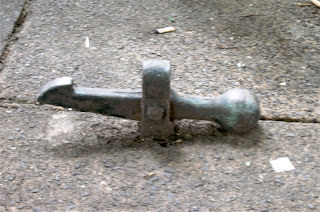 I drew a church, I must be a catholic 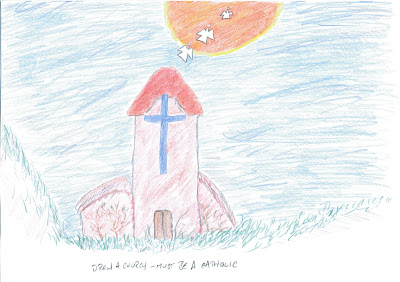 Q: Why is a catholic priest like acne?
A: They both come all over your face when you hit puberty.
Image by Paul. Thanks to Chris for the joke, which has been approved by the Committee of Opportunist Jokers

It's not all fun and games 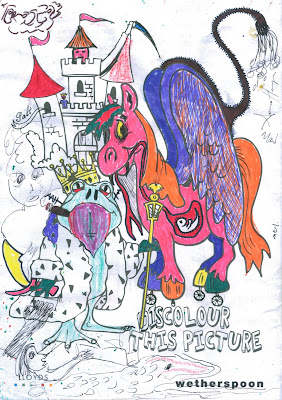 SLAG invites you to join efforts in the third London International Festival of Surrealism. This will take place from Monday 18th to Sunday 31st August, not just in London but all around the world. For these two weeks we will be celebrating the spirit of the Surrealist Revolution, playing all sorts of games and conducting investigations into collectivity.

As in previous years, the Festival is not for passive consumption, but requires your active participation, wherever you are. A few weeks before the Festival, we will circulate details of the games and events proposed by contributors. To this end we invite you to submit your proposals to the usual address by Monday 14th July so that we can collate them. We welcome proposals for games, investigations, enquiries, dérives, experiments – in fact, any collective pursuit which will further the Surrealist adventure. After the Festival, the results will be collected into an album and distributed to all contributors.

We hope that you will join us for these two weeks of the Festival.

Unbridle!
in rivers & streams & lakes
in bookshops, junk shops & markets
in pubs & bars
in parks & gardens & woods
in trains, planes & automobiles
in cafés & restaurants
in cemeteries, wasteground & abandoned sites
in the streets
online & offline
everywhere & nowhere
... anywhere other than inside a museum, art gallery or lecture hall.
Posted by Pearl Handel at 4:51 pm No comments: