Serbian authorities have arrested and detained five anarchists, including our friend Ratibor Trivunac. As well as being a prominent anarcho-syndicalist, Rata is a long-standing supporter of the international Surrealist movement with a wealth of knowledge about the often-neglected history of Surrealism in Belgrade. Members of SLAG who had the pleasure of meeting him in London two years ago are horrified at the news of these arrests.

Details of the five's arrest below are from Libcom.

The five, Tadej Kurep, Ivan Vulović, Sanja Dojkić, Ratibor Trivunac and Nikola Mitrovic, are activists in or associates of the Anarcho-Syndicalist Initiative, the Serbian section of the International Workers’ Association (IWA).

The arrests are allegedly related to a direct action which took place at the Greek Embassy on Aug. 25. Negligible damage was done; a crack in one window, a tiny burn mark on the facade and a circled-A graffiti on the embassy as an act of symbolic solidarity with Greek hunger-striker Thodoros Iliopoulos. The prosecutor however imagines this as an act of “international terrorism” and would like to charge our comrades with such. If the state allows such charges to be pressed, they could be facing 3-15 years in prison.

As it is, the five were arrested, harassed and are to be held in custody for at least one month while the case is organized.

Although one of the accused, General Secretary of the IWA Ratibor Trivunac, clearly and publicly declared that he knew nothing of the action, he was arrested. It is not the first time that authorities have come after him or his comrades for no other reason than the fact that they are radical critics of the state.

A demonstration in support of the five was held outside the London Embassy of Serbia and Montenegro on Friday 11th September.
There will be a second picket of the Embassy of Serbia and Montenegro on Monday 28th September, 12-2pm.
The embassy is at 28 Belgrave Square, London, SW1X 8QB. Nearest stations are Victoria, Hyde Park Corner and Knightsbridge.

Click here to send a message of protest to the Serbian government.
Posted by Pearl Handel at 8:03 pm No comments: 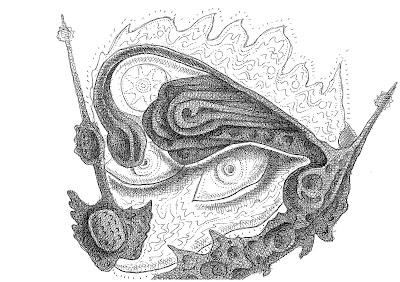 Posted by Pearl Handel at 4:13 pm No comments:

Pareidolia in the boudoir

Two different people's interpretations of the figures appearing on the same patch of a roughly painted bedroom wall. 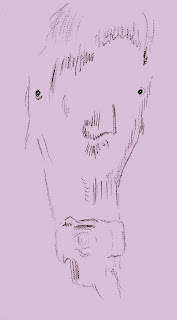 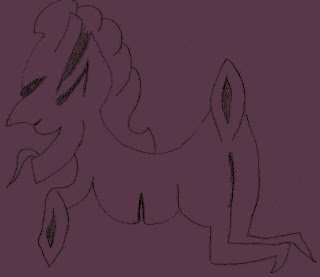 Posted by Pearl Handel at 5:37 pm No comments: