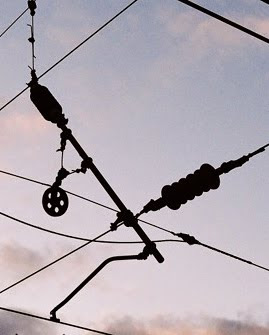 by Paul Cowdell
Posted by Pearl Handel at 3:45 pm 1 comment:

Some tidbits I dug up from a while back.....


“Abstruse thought and profound researches I prohibit, and will severely punish, by the pensive melancholy which they introduce.” (David Hume)

1.
step into oblivion thunder awaits you to draw a red armied circle onto your rotting arm with razor blessed impasto, buried those perverse verses of undulating ribbons, pink, sewn softly onto leather impermanencies with striped uniforms lined up against a backdrop of satin and tartan beads and sani tized caps hearing the machine gun bullets to the rhythm of a drum, taken by surprise as they arrive to already closed eyes and silent ears and silences tongues and with only the sender to receive them as the rest of the sweating world has closed their minds to them and closed their faces to them and baptized their hands from them and with sharpened thoughts one manages to flee the border patrol without contraband subjectification of thought, tongues and minds shall no longer be arrested only phantom wages of the unpaid debts withheld from the billions who suddenly wish to rise to the boil and flood the dams that have damned the wretched of our shoes the faces to our soles and the cherries of our beans which we consume through monetary straws - it’s a different kind of high, very post-modern and pseudofashionable and liberally labeled ¡viva la ladino! and star spangled ‘cino and open orifices of purple stained fleshes and rebel confessions of militant clashes spread as terrorist wishes by the white-washed and Colgate-stained Celebration occupation and blinded by White Mouse Realism. The sheltered daydreams of perfectionist wet dreams…fleshy tendencies. Track marks the spot.

2.
Take it take it take it wholly not impartial to fluorescent fluctuations but when time hits thunder all inside jokes and hoax explode unto leveling mechanisms of spatial statistics and organic transformations of organizational tumescent knowledges and totalitarian appendages and rotting dialectics of radioactive trips and flying hinges of elastic concubines and dispensable razor eunuchs. Turn it over, turn them over and fry the other side, the proper side, the red site and token blackened genetically malfunctioning malefaction of dusty roses and spring-time clashes. Silver transvestite bureaucratic bonobos taking tax incisions from wealthy blood owners.


The Body as the Site of Evil

1.
Motorcycle stare. Black-painted stares, draped ivories beneath hidden velvet. Five seconds of familiar understanding, polar climaxes crusading against the fall. Beautiful androgynous flesh, connected on the spur of a bridge. Beautiful unknowable. Black entrails embroidered in my yearning.
“We may all look different on the outside, but on the inside…we are all beautiful.”
A catwalk of anatomy. Flawed expression of selfhood. Humanity reduced to a perverse cannibalistic masquerade. An add-on of approval and appreciation. Vicious corporation, Capitalizing on murder.

They tried to reinvent my reality. Photos replaced posters…and he warned me about the red between my teeth and the sparkle powder on my jumper.
“Don’t let them see that on you. You best take it off.” Perfected through defection.
It glistened through the stones and cement particles. Forty shades of grey tattoo on my shin. My skin beneath the tattoo was crawling and it hit me that I had contracted the tattoo bug – bugs evolved to the purpose of tattooing humans. The tattoo, however, vanished with the bug.

Bell sounds, “round ‘em up!”…get them in designated ‘punishment’ area: the lower back. If you ran then any area is a punishable area. In my case, this was the thigh. Insert needle first, protest barbarism later.

“Isn’t it obvious? The Ghost. The Holy Ghost.” Jealous were all others as he took his place of martyr. Unsuccessful, a woman screamed. Forty percent of his body mass was missing, blown off though his limbs were still in tact. His chest bared decaying flesh, brown, old blood, bone. He cried as he had been suddenly deprived of purpose.

Acquired obscenities. Gothic consumption of Middle Eastern Royalty. Young meat rolled up in a Havana, pass the designer orange: everybody experiences a radically different effect. Winding stairs down an immaculately decóred dungeon. Fucking phenomenal! Seating arrangement on the altar of monarchy cheaply propositioned to party. Each filtered with a different taste.

How did I get here? Is he, as yet, enlightened? I think not pretty puppy. Rum and absinthe-filled absence; Just ‘something else to feel shitty about.’ A little honey and locker-room fantasy. Canvas prequel.

Crippled sexuality. Gyrating meat. Assembled on a line of plasticity. Act upon it. Objectified flesh tender in its own making. Disturbing in its movement. An obituary of sexuality. Elongated beauty in different shades of pink. Pink bits shatter the illusion –flesh covering brutality. Mimic normality beneath the shades of disguise…cruel, violent flesh. “…once upon a time I could love you.”

I’m on the border icicle stretched between words, oscillating personaes, emotions of disruption and false pretense. A veil of normality with the subservience of reality. Something’s pressing at me to remain tame. Between emotion and numbness objectivity always unifies scattered- disparate selves. Reification of memory in present speculation. It’s all he becomes: a memory to be evoked and observed and speculated upon with a detached gaze. Locking prior fears for they have been reified. A person is very strong and very weak at the same point. Survival demands suppression, until a note, a word, a feeling triggers the whole fucking tidal wave. “His name was Charlie…”


Wendy
Posted by Pearl Handel at 9:54 pm No comments: