Cthulhus, sir! Thousands of them! 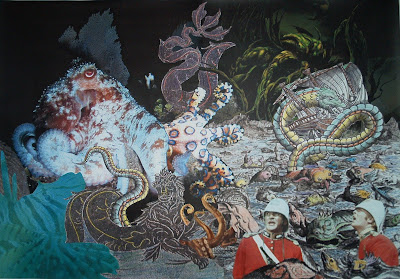 by Paul Cowdell
Posted by Pearl Handel at 11:34 am No comments:

Who fits up the Fitwatchmen?

This is the piece which led to the Fitwatch website being suspended at the request of Acting Detective Inspector Will Hodgeson of CO11 (as part of Operation Malone).We are posting it here in solidarity with Fitwatch and the Millbank protesters. Please circulate and repost on your own blogs and websites, Spartacus-style.

The remarkable and brilliant student action at Millbank has produced some predictable frothing at the mouth from the establishment and right wing press. Cameron has called for the ‘full weight of the law’ to fall on those who had caused tens of thousands of pounds of damage to the expensive decor at Tory party HQ. Responsibility is being placed on ‘a violent faction’, after the march was ‘infiltrated’ by anarchists.

There are an encouraging number of intiatives to show solidarity with the arrested students – something that is vital if they are to avoid the sort of punitive ‘deterrent’ sentences handed out to the Gaza demonstrators. A legal support group has been established and the National Campaign against Cuts and Fees has started a support campaign. Goldsmiths lecturers union has publicly commended the students for a ‘magnificent demonstration’ . This is all much needed, as the establishment is clearly on the march with this one. The Torygraph has published an irresponsible and frenzied ‘shop-a-student’ piece and the Met are clearly under pressure to produce ‘results’ after what they have admitted was a policing ‘embarrassment’.

51 people have been arrested so far, and the police have claimed they took the details of a further 250 people in the kettle using powers under the Police Reform Act. There may be more arrests to come.

Students who are worried should consider taking the following actions:

If you have been arrested, or had your details taken – contact the legal support campaign. As a group you can support each other, and mount a coherent campaign.

If you fear you may be arrested as a result of identification by CCTV, FIT or press photography:
Posted by Pearl Handel at 9:07 pm 1 comment: