By affinity the lovers daily resemble each other more and more 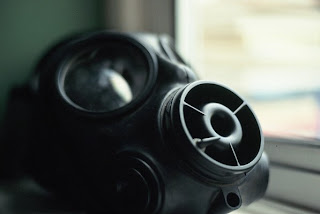 by Paul Cowdell
Posted by Pearl Handel at 7:06 pm

I really like this. It gets me on various trains. The window-view is all blurry, like a cliched french movie, but overall the background seems more scandinavian. but definitely not russian. or south american. I think its finnish.

I think its straighforward point is funny, and cute, and true. I'm gonna show it my sweetheart. Of course, it also raises several things without answering them, which gives it added substance.

there are not 2 circles, but four.
the mask is silent, to me, but powerful and dark.

as it is a mask, who/what would wear it?

and then, seeing thru 2 circles, speak/breath thru another circle?

and wear it as protection against what?

so... and the basic, most important to me, it is a big house-party, a celebration of the photographer's alertness...being alive. THANKYOU!!

2. After writing the above, I watched a DVD of Gilliam's Fear and Loathing in Las Vegas. I went to bed straight after, and when I closed my eyes it wasn't the movie, but this black mask that straightaway appeared in my mind. But now in its full sternness. Now the circles were holes out of which flowed think dark/black liquid, which rose up in the air, three of them, and so thick they stayed up there, partly like snakes but not even that solid, tending towards solidifying into dark creatures but always reverting back to a looser state. It wasn't scarey, more like a dream when you're simply observing events.

3. The following day the dark liquids had gone, but the mask remained that stern, silent, poweful thing. No more cute! It kept returning to my head, and I feel this was partly due to the situation here. Most traffic lights don't work, entire neighborhoods are in darkness, trees are down everywhere. So you really feel the impersonal, fierce power of nature, the primal seriousness of life and death is more exposed than normal.

3. After a daytime with the visual image bobbing around in my head, no longer 'analyse-able' to me, but powerful and mysterious, I decided in early evening to go and take some photographs myself.

4. What happenned next was a quite staggering example of objective chance, which hit me as hard as me and Merl's 'suitcase/boots' fusion a couple of months ago. I chose to not wander, but just one store-front, and take pictures only there. After being drawn to the store's door by a man with a hammer, I looked on the ground below him, and there -- I knew immediately -- were some of Paul's masks, but broken up. And this was not in a pile of trash, there was nothing but them on the ground. They felt 'presented' to me.
You can see my own photographs (and Pauls again) on my blog, boots,at google>martinmarriott.blogspot.com so: amongst many questions:

why are me and paul seeing the same thing?
why is his solid and mine broken up by a hammer?
why did i try and turn mine into a fish?

and finally: in the middle of my masks are the word 'jeep.' fair enough. but when i first read it, i mis-read it. And irecall my 'mistake' with a clarity that I know is important. I read it as 'jump'. Not jump with fear, i felt none of that. But i take it as an instruction to jump from where i am into the great big unknown, Because I already felt that i am getting to that point, of still being on firm ground really, but being pretty advanced towards the cliff-edge where it is an option to physically jump. to jump into this crazy shit of dark waters where all you've got is these markers, these images, and you have to know that's enough, because you're risking your life in the cause of these riddles, because you know that underneath them... is everything... underneath them is TRUTH.

thanks for your reply on my blog paul. I was aware that i had seen more than one, but only one in your picture.

and no doubt, you being paul, noticed that in trying to make a fish I also 'accidentally' gave the fish a penis.

how did yours come about? with what intention, and/or attraction?

I would be really interested to know other people's sincere responses (or lack of!) to paul's picture.

It also relates to the discussion slowly happenning (and it should be slow) on the 'society of the spectacle/banality of the visual image.' Clearly one can not discuss poetic materialism at the level of abstract ideas for long, or it becomes another form of idealism. We can move forward by plunging,like Charles Darwin, into scientifically observable facts, including observable mental facts.

let's haul our suitcases onto the Beagle!