AGAINST THE TYRANNY OF SHEEP 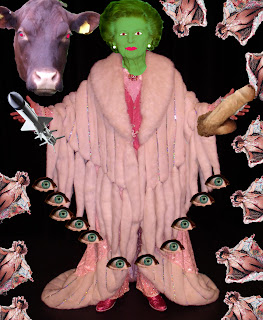 All Those Wasted Sphincters
collage by Stephen Maddison
Hurrah hurrah cry the British ruling class, look how proud we are that we killed hundreds of ill-trained and ill-equipped Argentinian teenagers 25 years ago. What evidence of our nobility that so many British servicemen left their limbs and faces scattered across the rocks of the south Atlantic to defend British colonial might in the form of a trading post surrounded by minefields on a rock in South Georgia. Meanwhile in Buenos Aires, the Argentinian government marks the occasion by demonstrating how grown up and statesmanlike it’s become as it implements the harsh economic model developed by its military predecessors. It defends the memory of those killed by the junta by going cap in hand to the butchers of Washington for scraps of favour. We’re not like the junta, it says, as it complacently watches the impoverishment of ordinary Argentinians and sanctions police brutality against those who protest.

Twenty-five years ago two moribund and unpopular governments engaged in a dispute to remain the biggest bully in the playground. Argentina’s military junta never challenged British colonialism’s enclave in the South Atlantic: had Galtieri won, it would merely have justified the prolongation of a vicious and bloody dictatorship on the backs of the Argentinian people. Instead it was Thatcher, that loyal friend of military dictatorships across Latin America, who claimed the prize and secured the continuation of her political ambitions. Her victory then opened the antechamber to the filthy prison world we find ourselves in now.

In 1982 two unpopular governments sought to establish their credentials by spending the one resource they didn’t have to pay for – the lives of ordinary young people who should have been fucking and dreaming side by side, not fighting and dying in opposition to each other. Right now in 2007 we have two governments which with their own particular characteristics and background can in no way be described as ‘popular’, and which are seeking to establish their credentials by making sentimentalised and hypocritical speeches around the graves that they filled. By mawkishly ‘commemorating’ the pointless carnage in the Malvinas they sentimentalise state violence, inuring their audience to bloodstains in the sands of the Middle East and Central Asia.

Against any notions of patriotic duty to those who sent the victims to their futile deaths, SLAG and the Surrealist Group of Río de la Plata are proud to declare once again our revolutionary Surrealist internationalism. We feel nothing but contempt for the logic of a system which, as much in the UK as in Argentina, continues to shoot dead innocent men like Jean-Charles de Menezes and Carlos Fuentealba. These governments claim to speak on our behalf but their words are indistinct with the blood and bone half-chewed in their mouths. It is not just that we have more in common with each other than with “our” governments: we have nothing in common whatever with those governments.

United by our utopian longings, on this occasion of the 25th anniversary of the end of the slaughter the Malvinas, we hereby declare the islands an Inclusion Zone, without flags or borders. Let’s raise the Belgrano and the Galahad, so that the lives thrown away so casually can once again people a fruitful world of imaginative potential. In our island utopia drowned sailors swim up from the cold and darkness, penguins wheeling and circling above them in the freedom of the sea. Shattered soldiers, their hair flaming like angels’ swords, rise again to fly with albatrosses and ride whales, their loved ones wearing coronets of snow, rushing to meet them on the backs of porpoises.

In the future these remote islands will be not just a trading post and gun emplacement, but a haven for dreaming and playing, for exploring the beauty and riches of the natural world. They will be an idyll for walking and swimming and flying with animals, for sharing our humanity and energy and imagination with each other, for fucking in sheepskins beneath a southern sky.

The islands will be a jewel in the navel of a Surrealist map of the world.

in collaboration with our friend and comrade Oscar McLennan, Surrealist ambassador of both Scotland and Ireland
Posted by Pearl Handel at 2:24 pm

This is a really good blog.

Anyone who thinks Thatcher wanted democracy for Argentina, are kidding themselves. The junta didn't expect Thatcher to act. Reagan was upset an anticommunist was overthrown.

Shattered soldiers, their hair flaming like angels’ swords, rise again to fly with albatrosses and ride whales, their loved ones wearing coronets of snow, rushing to meet them
Beautiful writing and a point well made.