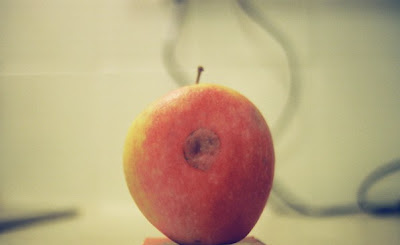 And than suddeynly he braste
by Paul Cowdell
Posted by Pearl Handel at 10:04 am

In Dallas recently a face was found in a rotten spot in an apple sliced in half at a bar. People began to call it "Mary", word spread, and a preacher even visited the bar, saying, "hmm," then leaving. The bartender who found this Virgin of the Rot stuck it into a freezer in order to preserve it. Interviewed by a Dallas television station, he wondered aloud if it would bring him good luck. He had put it up for auction on ebay but was persuaded to take it down.
The Virgin of the Rot's facial expression, evocative of some advanced stage of glaucoma combined with mild retardation, locked in the putrefaction of a Christian symbol of knowledge/wrongness, is fitting, and I can't help but think that all religions would be better off if edible.