In the middle of July, our comrade Nikos Stabakis came to London for a visit, bringing with him some new publications from the Athens Surrealist Group, including the latest issue of Klidonas. Two of us met him for a drink in the evening. We didn't really have time to look properly at any of the publications he gave us, because we were up very early the following morning to catch a plane to Stockholm.

Almost three weeks later in Stockholm, we went with some of our friends in the Stockholm Surrealist Group to a book launch party, and during the evening we proudly showed off the copy of Galerie du Mystère's Guide de Paris Mystérieux (1966) which we had found in a charity shop the previous afternoon. Flipping through the pages, Mattias Forshage suddenly stopped at an illustration on page 230 and exclaimed "But I saw this image somewhere else yesterday!" After a few moments he worked out that it must have been in the copy of Klidonas we had brought him as a present from Nikos, and which we still hadn't had time to look through properly ourselves. 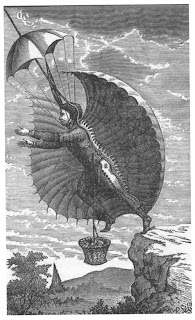 In Guide de Paris Mystérieux, the image is subtitled "L'homme volant" de Restif de Bretonne, and is an illustration for the Guide's entry on the Quai de Conti, where in 1580 an Italian man constructed a set of wings and attempted to fly across the Seine (he ended up in the water, apparently unharmed).

In Klidonas the image appears on page 96 as an illustration to a text by Sotiris Liontos – which, because we cannot read Greek, we are unable to decipher, apart from the English epigram from Shelley's Ozymandias.

(For one of us, the symbolism of this image is perfectly clear, particularly in light of another coincidence which took place the day before we found the Guide in Stockholm but which we did not find out about until after we returned to London. But that final stroke of objective chance must remain unpublished, "to protect the innocent" as the saying goes.)
Posted by Pearl Handel at 3:57 pm

I also saw the image on the Resolute Playfulness blog http://resoluteplay.blogspot.com/ (seemingly one of Apio's). There might possibly be a historic association between that occurence and the one in Klidonas, or it is all just an indication that we are all aesthethically predictable and are triggered by similar simple visual stimuli.