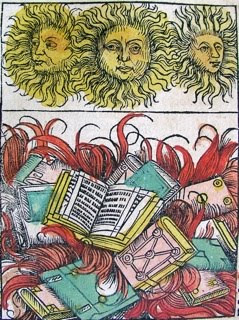 The only library that we defend is the one that’s set alight by its own blazing. Sheets of paper, sheets of flame. The Great Library will burn down Rome.
Posted by Pearl Handel at 12:38 pm

I think the universities should fall apart and be replaced by free schools where both students and teachers teach each other...not indoctrinate, not train to be cogs in a failing system (which is what universities do), not pay exorbitant fees that line the pockets of the Establishment. Classes that inspire rather than promote the rote. Community organizing, urban gardens...medical, meals, and the uplifting of spirits.