A Game of Refutation

March's game in the What Will Be almanac was A Game Of Refutation, proposed by the Paris Surrealist Group. The purpose of the game is to loosen reason's hold on reality and to gain access to a different, more 'unreasonable' kind of truth. 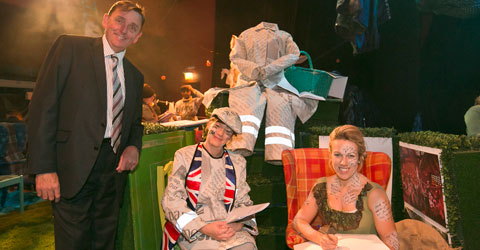 Here we have a typical scene in an NHS hospital waiting room. These two happy ladies have come to accompany their friend, who has an outpatients’ appointment. The gentleman on the left is a representative of a local charity which has supplied turf and hedges so that everyone can amuse themselves with a little light gardening while they wait, and perhaps even grow a few vegetables if they start getting hungry. Their friend, alas, whom they have seated in the middle so that she can have a good view of the green-fingered fun, has a terrible wasting disease which means that she has kept on shrinking and shrinking until her head and limbs no longer extend beyond the hems of her clothes. But with typical British pluck she refuses to be downhearted. The lady on the right has had the words of patriotic songs tattooed onto her face and body, and they can all hear the muffled voice of their sickly friend singing Land Of Hope And Glory from inside her quilted overalls. That’s why everyone in the picture is smiling.

In the second stage of the game, the other players provided refutations of Merl's interpretation:

Hahahahaha. Are you deluded? Is this a dream, or a delirium? This is no hospital, but backstage at the Third Annual Throat-Singing Competition. The woman on the right catalogues the lyrics on her body; the one in the middle puts the singers’ national flag round their necks as they sing; and the suited man, of course, is the host. The spare suit for the flag-bearing woman is kept in readiness because, of course, no self-respecting throat-singer wants a national flag hung around their neck, so she often finds her clothes being spat on, torn, and egged by audience and singers alike. The man in the background is a hapless volunteer who accidentally superglued his hand to his hat, and he hasn’t yet worked out that he could simply take his hat off to stop the aching in his arm.

This is paranoia and not real. Looking at us hungrily…these are not patients but doctors, not waiting for treatment, waiting for the poison to kick in so they can take our organs, which they will place in the green basket…a ‘charitable donation’ they will say. They put them in baskets to contain them, and the threaded wicker allows for breathing, porous. They put them in baskets because of manners/social etiquette which is to dream of teddy bears and picnics with bloody jam sandwiches which can never be ate because of a threaded mouth, just smudged in circular motions around and around in the fur…eventually the whole body is a mass of clumpy/sticky/matted fur…ordered and negotiated by neat and luscious hedges…all a case of keeping up appearances. Invented purely for the green basket, its better half. Appreciatively the green basket inhales, Thank kings and queens for tiny little holes in the skin!
And you can only smile (which is equivalent to eating) for so long before being reduced to organs, jammy mass, spinning on a teddy bears mouth/ mortal.
And im pretty sure they are all headless really, and I am just imagining faces. Limbless really and I am just imagining limbs. What we are seeing is the digestion of OUR organs, under those clothes, twined together (as you would the innards of taxidermy, or thread a teddy bear). Twisted bastards. Never the less they are representatives of localness, locality. They represent the jammy mass and so are charitable, good people, good good good. Thank you for your donation.
the man in the distance looks over at us and not them.
Our organs are going to GREAT BRITAIN (in a green wicker basket)
Kirsty Woods

Here we have a gathering of witches and a high priest for an unholy Sabbath. The suit belonged to a child lost at sea and never found. Filled with finely ground seashells and charcoal, it has been placed prominently in position to allow a fleeting return of the boy’s soul. The high priest runs a coal supply company and has donated two sacks for this gathering. These will be made into red-hot coal beds, upon which strangers will be made to dance gracefully. All this makes for a successful evening and that is why everyone is smiling.
Patrick Hourihan

No. This is behind the scenes at a Grand Prix in Switzerland, where the skivvies of big tobacco companies are forced to await their call to work. The woman on the right is a secretary for one of the motor-racing teams. The company makes her buy her own stationery, so she has taken to writing memos on her skin. The woman next to her is an agent for a tobacco company, who has been sent to prevent discontent among these poorly paid hirelings. She has dressed in the uniform of a track scavenger (one of the people who pick valuables from dead drivers trapped in burning wreckage) to hide her identity. The disguise has failed miserably, because her hat is made of paper, her scarf is cut from a banner for the Swiss People’s Party, and her large knife is barely concealed beneath her coat. Behind her is the body of a minion who had to be chastised on a previous occasion. The head, hands and feet were removed with a handsaw and displayed to the cheering advertising executives lining the trackside. The rest of the corpse was then mounted here as a warning to the other serfs. Beside the two women stands a local weather presenter, whom the company agent is about to dismember on the suspicion of child abuse. A police investigation will subsequently find this suspicion to be baseless, although the presenter was, everyone agreed, a charmless loner. In the background can be seen two track scavengers drawing up an inventory of valuables found on the corpse of a driver killed during a time trial that has not yet finished.

This is in fact, not an NHS waiting room but a candid moment backstage during rehearsals in Geneva where, due to public spending cuts, the UK’s entry for the 2014 Eurovision Song Contest has been amalgamated into the delegation representing British quantum theory research at the CERN large Hadron Collider.
To the left of the group, Roger Black, Britain’s 400m silver medallist at the 1997 World Athletic Championship can be seen as official ambassador of the GB Olympic Committee.
The empty suit belongs in fact to none other than Patrick Moore, icon of British TV astronomy for over 50 years, and is the official mascot for this year’s British entry.
The group, made up of 2 ex-members of Bucks Fizz, have the lyrics to their song ‘Boom Boom Big Banger Bang Bang’ written – in binary code – on post-it notes stuck to their clothes in a last ditch attempt to remember all the lyrics in time for their big night.
Paul Day

In the third and final stage of the game, the players together compared and discussed all of the interpretations and refutations in order to excavate a further layer of poetic truth:

This is a dream Switzerland. There is a state of ritual with singing. It involves gathering organs from a child lost at sea in order to create a sea for a landlocked country. The child will then be lost again in this new sea, in a self-perpetuating cycle. Only countries with an oceanic border are allowed into the throat-singing competition, and a league of landlocked countries is established to discuss their specific concerns. They are setting up border agencies to scare away migrants.
The refutations are refutations of detail, not of tone, and we thought about where the latent desire might be. This is clearly their dream, and we are looking into their dreams in order to cut off their heads. The ritual is to enable this.
Posted by Pearl Handel at 5:28 pm