On 3rd January 2007, SLAG participants and friends celebrated the Wolf Moon by hunting for wolves in central London.


1. On the way to the meeting point

Paul heard the cries of wolves (which sounded like police sirens) and found the husks of wolf claws on the pavement.

2. Preparing for the hunt:

We used an object to help us establish the irrational characteristics of the wolf by means of a collective question & answer game.

i. Is it useful?
Yes (Nacho, Tobias)
Yes, but only when lactating (Debbie)
Yes, as a reminder of a story (Carolina)
To a degree it can be, if you approach it well (Josie)
Only insofar as it is the foundation of all our city (Rema not Roma) (Paul)
Not remotely (Merl)

ii. Where in London does it live?
In a lady’s house (Nacho)
In a Goth shop (Tobias)
In a willow tree (Josie)
The lying-in hospital (Paul)
Stoke Newington (Merl)
Hackney borders (Debbie)
All around (Carolina)

iii. Is it fast or slow?
Moderately slow (Josie)
Slow, very slow movement (Tobias)
Both slow and fast (Carolina, Nacho)
Slow by day, fast by night (Debbie)
Completely stationary, except underwater where it is superfast (Merl)
The speed of a dying heart (Paul)

iv. Is its bite poisonous?
No (Nacho, Tobias)
Yes, depending on perspective (Carolina)
Extremely poisonous and smells of cinnamon (Merl)
Only to good people (Debbie)
Only to humanoids (Josie)
Like mother’s milk (Paul)

v. How far can its voice be heard?
Until it stops crying (Josie)
Far away (Nacho)
Very far, universal (Carolina)
Up to 20 miles away, and at least as far again underground (Merl)
Only on Parliament Hill (Paul)
On Pluto (Debbie)
It’s very quiet (Tobias)

vi. Where is its lair?
Under the stairs at Piccadilly Station (Debbie)
Under plastic sheeting in an alcove in the walls of St. Paul’s Cathedral (Merl)
Deep in the darkness (Nacho)
Between the skull and the brain of its children (Josie)
Beneath it, wherever it is (Paul)
On a shelf (Tobias)
No idea (Carolina)

vii. Is it real?
Yes (Merl, Nacho, Tobias)
Always, because it is imagined (Paul)
Yes, as knowledge and memory in the head (Carolina)
Only at certain times of day (Debbie)
Its reality can be seen on full moon (Josie)

viii. Does it bite?
Yes (Nacho)
Yes, some people (Carolina)
Yes, twice a year (Josie)
Only itself (Paul)
Only good people (Debbie)
Only when threatened (Merl)
It bites if thrown (Tobias)

ix. Can you hear the sound of it falling if you’re not there?
Yes (Nacho)
It depends (Carolina)
Yes, if it falls backwards (Josie)
Yes, as a bizarre rustling under the pillowcase (Merl)
Only if it isn’t there (Debbie)
Only if amplified (Tobias)
It will never fall (Paul)

x. What makes it happy?
Falling (Paul)
Singing (Josie)
Paper underneath it (Tobias)
Others like itself (Nacho)
Marzipan, staircases and hot chestnuts (Merl)
Luxury and adoration (Carolina)
Slimy things (Debbie)

xi. Does it have feelings?
Yes (Carolina, Debbie, Tobias)
Yes, but no understanding of what they are (Paul)
Yes, pity (Josie)
Yes, maternal feelings (Nacho)
Only under the full moon (Merl)

xii. What beer would it order?
Heineken (Nacho)
A pint of Guinness – very masculine (Carolina)
Something Italian (Tobias)
The darkest beer at the bar (Merl)
Something thick and cloudy (Josie)
Beer made by trappists defrocked for shouting (Paul)
It only drinks wine – Wolf Blass (Debbie)

xiii. How does it survive?
On its own (Nacho)
By not being there when it’s heard (Debbie)
By building walls of ice around itself (Paul)
By touting tube tickets and eating leftovers (Merl)
By eating dust (Tobias)
By rapid evolvement (Josie)
In the past (Carolina)

xiv. What does it desire?
No idea (Carolina)
Attention (Tobias)
Others like itself (Nacho)
Snow, pearls, amphibians, golden eggs (Merl)
The bodies of slimy things (Debbie)
To be the last vestige of the civilisation it built and then destroyed (Paul)
More teats (Josie)


3. The search for the wolves

Nacho was very certain that the wolves would be on Adelphi Terrace and led us all straight there.

On this terrace there were many staircases – which make wolves happy and may also provide shelter for wolf lairs. There was also some plastic sheeting in an alcove, or at any rate a plastic bin bag full of pine branches – a suitably arboreal lair for an urban wolf.

The Adelphi itself was covered with stone relief carvings of signs of the zodiac, cherubic children engaged on baffling errands, magical and mythical animals, but wolves were conspicuous by their absence from this menagerie.

Photo by Merl
Someone had left an illegible message in the window of one of the Adelphi’s doors. One of the doors of the buildings opposite the Adelphi was neatly marked “Goods Only”, as if it were the door to the waiting room for the good folk about to be bitten.

Photo by Merl
A large stone relief human figure on the Adelphi appeared to Merl and Debbie to be of ambiguous gender, despite its large beard, because of its apparent breasts – the “more teats” that wolves desire?

The wolf itself appeared not on Adelphi Terrace, or on the Adelphi itself, but on a building on Adam Street: high above us at the apex of a large stone window, a stone relief of a flying wolf head with ferocious open jaws.

A blurry shot of the wolf as it soars overhead: photo by Merl

4. Debriefing after the wolf hunt

As we arrived at the pub, Paul found on the floor under our table a single silver fork. He had recently been told of the Estonian tradition that to offer someone a fork with the tines pointing towards them is a way of protecting them from werewolves.

"And so I was protected from the werewolves": photo by Paul Cowdell
This prompted a discussion of werewolf trials and of various measures for keeping werewolves at bay. Tobias reminded us of the “brotherhood of the wolf”, and we realised that the Adelphi is so called because adelphoi is Greek for “brothers”. (The Adelphi was built by the Adams brothers during the eighteenth century to clear a rookery on the site – not entirely successfully, as we still found a few rough sleepers there, under staircases and in alcoves.)

This found image appeared to Paul the day after the wolf hunt:

And Josie was also pursued by wolfish shapeshifters through found images: 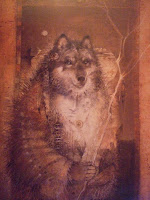 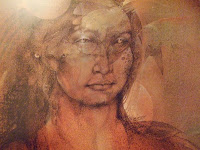 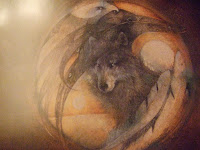