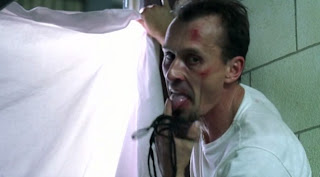 Sometimes popular culture turns auto-cannibal and tears itself open in a sudden outbreak of revolt, desire and ecstatic grand guignol. The early twentieth century had Fantômas; the early twenty-first has Prison Break. This Fox TV serial, the second season of which is currently airing in the UK, began modestly enough with the merely preposterous, but is now flowering into a magnificent, heart-stopping, sanity-defying stinking-corpse-lily of poetic lunacy.

Who can watch unmoved as a psych ward escapee, draped in a stolen life-jacket and accompanied by a stray dog, builds a raft on the shore of Lake Michigan to sail away to the Holland he fell in love with in a painting on a blind woman's living room wall? Who can fail to recognise, in the rivalries, loyalties, bitter hatreds and yearning eroticism among the various members of the outlaw gang, the daily emotions of every Surrealist group worthy of the name?

In the middle of Season One, Prison Break's breathless viewers watched our heroes prepare their escape from the penitentiary by piercing the eye of a projection of the head of Satan with a drill made from an egg whisk which they had concealed up each other's trouser legs, while a deliberately induced prison riot raged around them, as they gauged the correct drilling pressure ("hard, but not too hard") by comparison with their memories of penetrative sex. We may have thought this the highest apex of delirium. But then Season Two ushered in the apotheosis of T-Bag, the purest possible distillation of anti-social revolt, with his severed hand, his treacherous glee, and his utterly irredeemable sexual depravity. Is there nothing or no-one that T-Bag won't fuck, kill, destroy or ingest in pursuit of an obscenely fantasised Thailand utopia? The dalliances of Gurn are insipid by comparison with this monstrous incarnation of the Id run amok.

Prison Break: an inadvertent masterpiece of the Surrealist spirit, a testament to the unstoppability of the desire for freedom. You know it makes sense.
Posted by Pearl Handel at 7:12 pm