Just because you’re paranoid, it doesn’t mean they’re not really out to get you. On Monday the House of Commons nodded the Mental Health Bill through to its second reading without a vote. If the Government has its way, the new law will both expand the legal definition of “mental disorder” and introduce new powers to force those with such disorders into treatment or detention against their will.

Current legislation in the form of the Mental Health Act 1983 explicitly excludes from its definition of mental disorder such conditions as drug or alcohol dependency, promiscuity, “immoral conduct”, “sexual deviancy”, commission or likelihood to commit acts of crime or disorder, and “cultural, religious or political beliefs”. The new Bill proposes to remove all of those exclusions except that of drug or alcohol dependency. Indeed the Department of Health’s own Summary Guide to the Bill openly states that it will place “disorders of sexual preference” such as fetishism or other “paraphilias” within the purview of the law. It is clear however that the main target of this expanded definition of mental disorder will be those diagnosed with personality disorders. Personality disorders are notoriously hard to define, but the basic general definition cited by the Mental Health Foundation is “enduring patterns of cognition, affectivity, interpersonal behaviour and impulse control that are culturally deviant, pervasive and inflexible, and lead to distress or social impairment” (emphasis added).

As well as expanding the definition of “mental disorder”, the Bill also sets out to extend current powers to detain and/or “treat” individuals diagnosed with such disorders against their will. While the 1983 Act requires that patients be categorised by health professionals as “treatable” before they can be detained or treated by force, the new proposals seek to remove this so-called treatability test. This would mean that individuals could be subjected to forcible treatment even if that treatment was unlikely to improve, or even stabilise, their mental health. Moreover the “treatment” on offer under the proposed legislation would now include new Community Treatment Orders (CTOs) for individuals released as outpatients after forcible detention in hospital. CTOs, which some campaigners have already dubbed “psychiatric ASBOs”, could include not just forced medication but also restrictions on individuals’ behaviour and lifestyle – who they see, where they go and what they do. Breach of a CTO could result in forcible return to hospital. With African and African Caribbean people already over-represented in psychiatric hospitals, there is understandable concern in many quarters that these new and extended powers of forcible treatment will also be disproportionately used against black people.

In short, the Mental Health Bill is just the latest in a long line of measures, from ASBOs to ID cards, championed by the Government in its assault on liberty in the name of “public safety”. It marries Blairite lip smacking over “anti-social behaviour” to the good old-fashioned stigma of mental illness, and grants to state agencies a frightening array of powers over cultural deviants who have committed no crime and to whom the “treatment” will be of no benefit whatever. As self-consciously maladjusted cultural deviants who are often painfully distressed and impaired by a brutal world, who celebrate polymorphous perversity and actively sow the seeds of sexual disorder, whose rage is pervasive and inflexible and whose spirit of revolt is profoundly anti-social, Surrealists everywhere, with or without our individually diagnosed “mental disorders”, have as much cause as anyone to greet these proposals with horror. 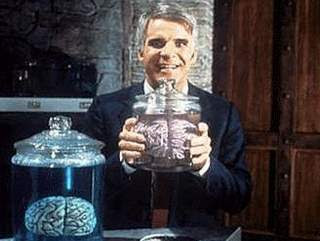 Pearl Handel's psychiatrist remains surprisingly
upbeat about her treatment options.
Posted by Pearl Handel at 12:21 am

At the same time, the dangerous sociopaths slip under the system untreated, and posing an actual danger to society.

This new Bill was originally proposed in response to a high-profile murder case in the UK in which the murderer was diagnosed with anti-social personality disorder (ASPD). In 1996 Lin and Megan Russell were killed by Michael Stone. Before the murder Stone had been diagnosed with ASPD, but had not been detained under the 1983 Act because he was not considered treatable. At the trial he was deemed responsible for his actions, and convicted of murder accordingly, because ASPD is not a mental illnesss. Nevertheless "public opinion" in the guise of right-wing news media took the view that he should already have been incarcerated on the basis of his ASPD diagnosis before he had committed the murders.

Many of us are deeply suspicious of psychiatric categorisations and diagnoses, but even those who accept them stress that a diagnosis of ASPD in itself does not consitute grounds for incarceration. The Mental Health Foundation's briefing paper on personality disorders states that a personality disorder on its own neither directly causes nor fully explains acts of violence. Mental health charities and psychiatrists have therefore condemned this Bill as a gross over-reaction to the Stone case. To give someone a diagnosis of ASPD is not automatically to designate them a danger to society.

It's ironic that the progress of this Bill on Monday was wiped from the mainstream UK news agenda by the Virginia Tech massacre. Journalists have spent the week speculating pointlessly about Cho's individual psychopathology and even his creative writing. Their time would have been better spent enquiring into the culture of militarism and brutality that pervades life in the US. While immediate responsibility for this latest massacre of course lies with Cho, the wider repeating pattern of such events on US campuses surely requires a more social and political analysis. Fear of individual system-evading "sociopaths", treatable or otherwise, merely obscures those deeper questions -- which of course is why violent and repressive governments are so keen to feed that fear with measures such as this Bill.