The poet and Surrealist Angye Gaona has now been charged formally by the Colombian prosecutors with the crimes of drug trafficking and "rebellion". The trial is scheduled to start on 23 January at the special criminal court in Cartagena de Indias, and if found guilty Angye could face a jail term of 20 years. She is wholly innocent of the charges against her. 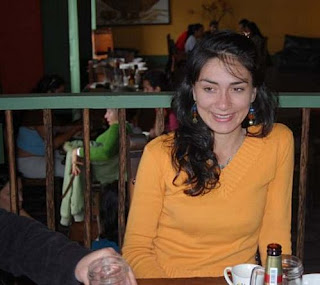 In press articles and interviews Angye has passionately defended the cause of indigenous people (many of whom are being killed by paramilitary gangs on the orders of land developers – Angye has called this "genocide"), trade unionists and the working class (who are constantly being repressed by government-backed industrialists). She has also called the current Colombian government "a terrorist government". For these reasons she is considered a nuisance by the ultra-conservative government.

Angye was arrested in January last year on her way back to Colombia from a trip to Venezuela. At that point she was imprisoned without charge, but was later released following international pressure. After her release she was formally charged with drug trafficking. Once that charge was underway she was then also charged with "rebellion"; the prior charge of drug trafficking meant that she could not at that point apply to any foreign embassies for political asylum . Hence she had no choice but to face trial in Colombia. She is currently under house arrest in the single room she shares with her six-year-old daughter.

Her trial may have a very serious outcome if nothing is done. Colombia is known for its political trials. At the moment some 7,000 political prisoners are serving long sentences in terrible and overcrowded prisons. It is necessary therefore to make it clear to Colombia's judiciary that Angye's case is being closely followed worldwide.

To this end, Angye's friends and supporters are being asked to write to the examining judge in her case to request a fair trial. The form of words below is based on a text suggested by Cristina Castello. To increase the pressure you may want to send a copy of the letter to the Colombian embassy or consulate in your own country. It will also be helpful to the campaign – and be a morale boost for Angye – if you would contact the campaign to let them know that you have sent the letter.

Further information about Angye's case and the campaign to defend her is available on the following sites:

As citizens of the world and passionate defenders of liberty, we wish to express our concern at the situation of the Colombian poet Angye Gaona.Angye Gaona is certainly no drug trafficker. She traffics only in words, and in a fierce determination to defend human rights in her own country.In solidarity with Angye Gaona we therefore ask you to defy political pressure and exercise your faculties of justice and reason.Her poetry and her humble living conditions testify to her innocence more eloquently than any lawyer. Her only "crime" has been to speak the truth through her poetry.Poets are the soul of the people, and it is surely of crucial importance to Colombia that the life and liberty of its poets should be respected.We hope that you will ensure a fair and balanced trial that will do honour to your country.Yours faithfully[names]